Some insects are clearly recognizable as such. Other insects can easily be mistaken for something else. Scale insects fall into the latter group.

Scale insects vary in appearance. Some look like small flecks on leaves or bark. Others look kind of like wads of gum. The adult females, which are the ones you’re likely to notice, either do not move or move very little.

Most of our common scale insects fall into either the armored, soft, or felt scale families.

Armored and soft scales have waxy covers. If you try to flip the “shell” off of a scale and succeed in separating the “shell” from the rest of the body, then you have an armored scale.

False oleander scale, a white scale often seen on southern magnolia leaves, is an armored scale. Another common armored scale is tea scale. This is commonly found on the undersides of camellia leaves. When tea scale is present, there are often yellow spots on the upper sides of the leaves.

Soft scales have “shells” that can’t be separated from the rest of the body. If you attempt to flip the “shell” off of the body, the whole body will turn over. Like aphids and whiteflies, soft scales secrete honeydew, so you’re likely to see black sooty mold that grows on honeydew when soft scales are present.

Finally, members of the felt scale family have waxy filaments on their bodies. They resemble mealybugs, to which scale insects are closely related.

Crapemyrtle bark scale and azalea bark scale are felt scales. These are often found on branches or trunks. Like soft scales, these secrete honeydew, so sooty mold is often seen when felt scales infest a plant.

Scale insects extract nutrients from plant tissue. If large numbers are present, they may stunt or cause dieback on plants.

To avoid scale problems, first make sure that plants aren’t stressed. Place plants in locations to which they’re well-suited with regard to sunlight, moisture level, etc. Keep plants healthy with appropriate mulching, fertilizer application and, if needed, irrigation.

A number of beneficial insects can help keep scale populations in check. Minute pirate bugs, lacewing insects, and several types of lady beetles have been found to prey on crapemyrtle bark scale, for example.

If you want to target crawlers, it’s a good idea to identify what type of scale it is first, so you can get a better idea of when the crawlers are likely to be present. Double-sided sticky tape can be used to find out more precisely when crawlers are active.

While some broad-spectrum insecticides can succeed in killing scale insects if applied when crawlers are present, there have been studies in which scale populations were greater when certain insecticides were sprayed, likely due to the deaths of beneficial insects.

Another option is a soil-applied imidacloprid or dinotefuran product. These are taken up into plants so that insects that feed on the plants are exposed to them. Dinotefuran is suggested for armored scales. Both imidacloprid and dinotefuran are options for soft and felt scales. To reduce risk to bees from insecticide in pollen or nectar, wait until just after plants have finished flowering for the year to use one of these. 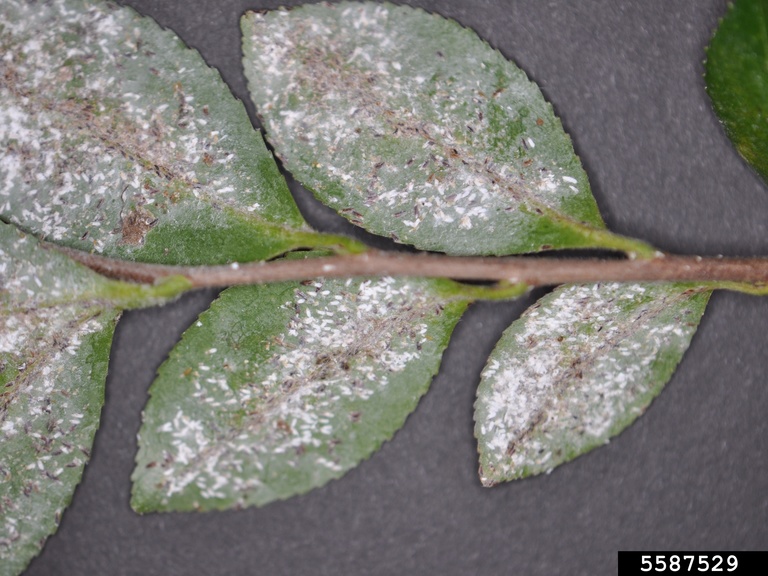