The muscadine is one of the fruits – along with rabbiteye blueberry, American persimmon, mayhaw, and some blackberry/dewberry species – that’s native to the southeastern United States. They’re clearly well-adapted to our climate. Wild vines are often so vigorous that they can be seen growing out of the tops of trees.

In spite of their clear suitability here, they haven’t achieved the popularity of some other fruits. I grew up in Louisiana but don’t think I ever ate a fresh muscadine until I moved to North Carolina. I liked them quite a bit and, over time, went from eating the pulp and skin and spitting out the seeds to just eating the seeds, too.

Home orchard muscadines, on the other hand, can generally be grown without fungicide or insecticide applications. Yields vary widely among varieties, but a single plant may produce from 30 and 100 pounds of fruit when mature.

People sometimes refer to bronze-fruited muscadines as scuppernongs, but Scuppernong is actually a specific variety. It was the first named variety, found near the Scuppernong River in North Carolina.

While some muscadine vines growing in the wild have only male flowers and so do not produce fruit, cultivated muscadine varieties have either self-fertile, “perfect” flowers (ones with both male and female parts) or female-only flowers.

Carlos (bronze) and Noble (purple) are old standard, self-fertile varieties well-suited for juice and wine production. If you want to eat fruit fresh off the vine though, there are better choices.

One of my favorites is Supreme. This is one of the largest muscadines and has purple skin that is considered more edible than that of most varieties. It’s a female-flowered cultivar, so you’ll need another vine to provide pollen.

Paulk is a self-fertile variety that has purple fruit similar in size to that of Supreme. It was just released in 2017.

RubyCrisp is one of the newest cultivars, having just been released earlier this year. It’s not recommended for commercial production, since fruit tends to crack when it’s not handled carefully, but it’s self-fertile and produces reddish-purple fruit with a high sugar content and tender skin.

Other self-fertile purple varieties to consider include Ison, Lane, and Nesbitt. Self-fertile bronze varieties for fresh eating include Hall, Tara, and Triumph.

If you have room for at least two vines, you can consider a female-flowered variety. Supreme is a clear winner among female-flowered purple cultivars. Female-flowered bronze cultivars include Darlene, Early Fry, and Summit. The traditional fresh-market variety Fry fits in the latter group, as well, and remains popular but is prone to fruit rot.

Most muscadine varieties still have seeds. However, within the last few years, some seedless grapes resulting from crosses between muscadines and bunch grapes have become available. RazzMatazz grapes are small and red. The plant produces fruit over a long period, flowering until frost. The seedless Oh My! grape is bronze.

Because they are so vigorous, muscadines need a strong trellis. It’s recommended that vines be planted 20 feet apart. January and February are good times to plant muscadines, but you may need to order them earlier to get the varieties that you want. 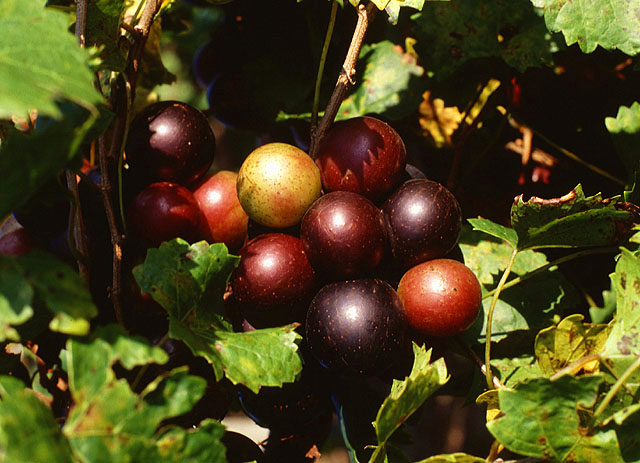