As discussed last week, insect and mite pest problems can often be prevented or reduced by using good cultural practices. However, insecticides are sometimes needed to avoid significant losses.

This week, I’m writing about “chewers,” or insects that make holes of various sizes in various plant parts.

Caterpillars, which are the larvae of moths and butterflies, can cause highly visible damage on plants. Some examples of caterpillar insect pests are hornworms (often found on tomato), corn earworm AKA tomato fruitworm, cabbage loopers, cutworms, and squash vine borers.

While caterpillars cause some of the most noticeable damage to plants, there are a number of insecticide options for managing them. Products with Bacillus thuringiensis subsp. kurstaki (Btk) as the active ingredient target caterpillars, specifically, and are some of the insecticides least likely to harm bees and other beneficial insects. Proteins in Btk products become toxic to caterpillars after they get into the insects’ digestive tract.

Insecticides containing spinosad have efficacy against caterpillar pests and, while they’re not as selective for caterpillars as Btk products are, they pose less risk to beneficial insects than some other insecticides. However, they are toxic to bees prior to drying. The threat to bees can be reduced by spraying at times when bees are not likely to be active, such as the late afternoon or evening.

Other active ingredients with efficacy against caterpillars include carbaryl and the pyrethroids (active ingredients ending in "-thrin," plus esfenvalerate). These are broad-spectrum insecticides that pose more risk to beneficial insects, so it’s better to avoid using them when alternatives are available. To minimize the threat to bees, avoid spraying plants (including weeds around vegetable plants) while they’re flowering if possible, and spray at times when bees aren’t active.

Besides caterpillars, beetle pests also have chewing mouthparts and make holes of various sizes in plants. Pests in the beetle order include flea beetles, Colorado potato beetles, cucumber beetles, bean leaf beetles, and weevils, including cowpea curculio. There are fewer effective options for beetles than for caterpillars. The pyrethroid insecticides, carbaryl, and malathion generally have efficacy against beetles. Spinosad is effective against Colorado potato beetle, specifically.

Before using an insecticide, be sure to make sure that it’s labeled for use on the vegetable(s) on which you plan to use it. Read and follow all label instructions.

The cabbage looper is one of several caterpillar pests of cabbage and other plants in the mustard family. (Photo: Whitney Cranshaw, Colorado State University, Bugwood.org) 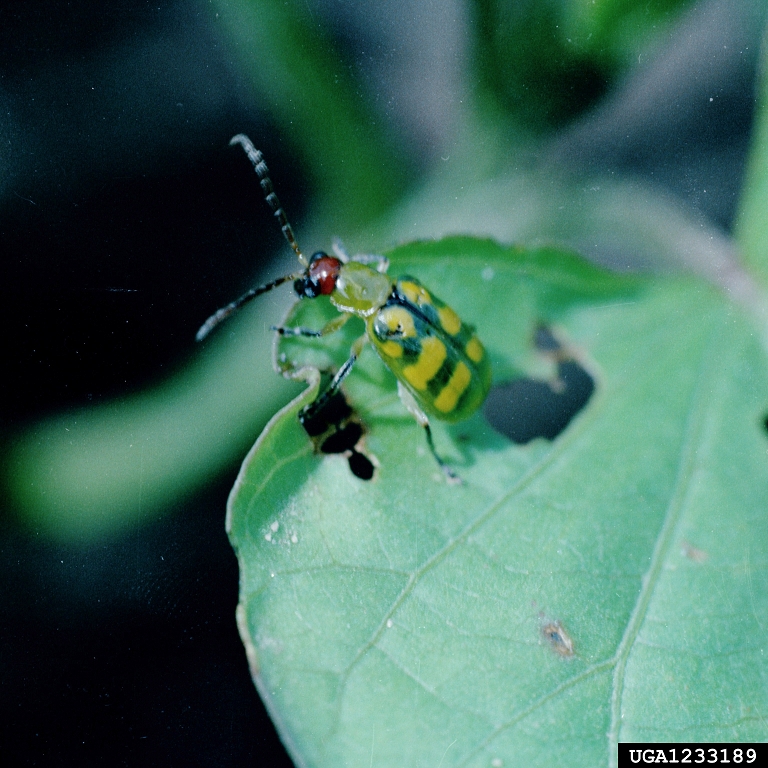